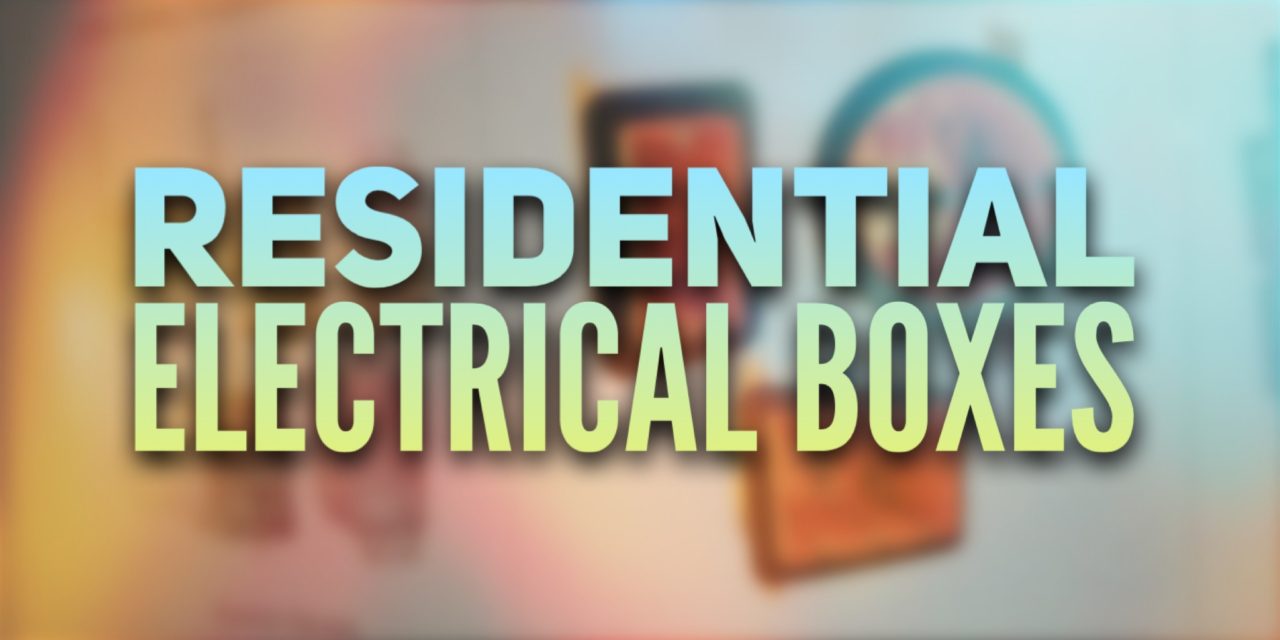 In this article, I will cover a bunch of common residential electrical boxes.

Keep in mind, this article will probably get outdated pretty quick, as the industry has constantly been changing the way things are done in Canada, especially when it comes to outside walls and outside ceilings.

For the most part, all this information should be relatively useful on-going in your career.

Single gang boxes are our most common electrical box as electricians.

They are installed on the INSIDE WALLS of your building/home and are typically used for switches and plugs.

I’ve seen them come in a variety of colors, but mostly grey and yellow in my area.

We usually install them with 1″ wood screws, as that will hold best in the long-term. However, in my earlier years, I’ve installed these with nails, too. (I’d recommend screws, personally. It’s quicker and quieter.)

Sometimes you can have both a plug and switch installed, too!

A common technique I’ve seen if you’re pulling two different lighting circuits to this box from the same panel is to draw a line with a permanent marker indicating there are two different circuits.

This is just good for communication to let the next electrician know there is more than one circuit in that box. Otherwise, down the road, someone may use the neutral of different circuits without realizing it! (Remember, our neutrals aren’t protected by a circuit breaker, so the last thing we want to do is overload a neutral!)

These are exactly what you’d think; same box, just more places for devices.

The most important thing to mention is anything three gang or larger needs to be supported on both sides of the box.

So, whatever the size of the wall is, let’s say 2×6, you’ve have to cut a 2×6 scab and screw it on the opposite side of the box. This is for when drywall is installed, the scab is sandwiched in between the drywall giving it strength. (Or, if the drywallers screw into the scab, too!)

In a residential atmosphere, almost all lights use octagon boxes.

Another box we use for lights is called a pancake box.

We use pancake boxes when we can’t get center with a regular box. An important thing to mention is you’re only allowed one wire in a pancake box. (No splices to be made, but a 14/3 is allowed.)

As mentioned, things change fast in the electrical industry.

Before, we used to use regular boxes, which above I said were to be installed only on inside walls, and put a vapor bag over the boxes installed on outside walls.

The current trend (writing this as of May 2018) is vapor barrier boxes.

In my opinion, I do like the vapor-barrier boxes more just because of speed/convenience.

Again, these vapor barrier boxes are to be installed on outside walls so the insulators can seal their ploy around the box, creating a vapor barrier inside the building from the outside weather.

The boxes are typically the exact same, except they have a outer foam on the front, and a foam cover where you insert your wires on the back.

OTHER COMMON BOXES RESIDENTIAL ELECTRICIANS USE

I will quickly cover some other common boxes residential electricians use:

A really common box we use are called E-Z Boxes (sometimes called a Rework Device Box).

We typically use E-Z boxes if we’ve forgot to install a box in the rough-in stage.

Hence the name for being easy, they are a super quick install if you just want a plug somewhere on a wall. They tension fit onto the drywall and you can install your plug/cover plate. It’s really quick and you’d never know an E-Z box was used!

Aside from being used when a box was forgotten, or someone wanted to add a plug after drywall was installed, is if we’re installing a plug in the island cabinetry.

Another popular use of E-Z boxes as of late are big media panel boxes. We install these E-Z boxes at the bottom of those media panels for the plug.

Data rings are used for low-voltage.

The picture below is for an existing wall where you’d cut the drywall and insert this data ring.

In a brand-new build, there are data rings which actually screw to the stud. Some job sites don’t like data rings, so they require you to just install a regular single gang box like shown above.

It’s important to understand that low-voltage is from 120V-750V!

These data rings are to be used for EXTRA-LOW-VOLTAGE.. so that is things like telephone, internet, fiber, or any other type of extra-low-voltage type cables and connections. This is very important, because these data rings (or low-voltage rings.. yes I know it’s not “extra-low-voltage rings” 😛 ) do not have a back to them.. so your connection is not contained in the safety of a plastic or metal enclosure.. (If something arcs with 120V, it is contained in a box, to help prevent fires).

These are very similar to a standard 4×4 (double gang) box you would see, except IT’S DIFFERENT… so be careful.

First, they are a bit bigger, as they’re meant to fit a big 30A or 40A receptacle for a Dryer or Range (Oven) respectively.

Second, they are more expensive than a standard 4×4 box. The actual term for this Dryer or Range (Oven) Electrical Box is “4-11/16-inch Box”.

Third, be careful if you are using these 4-11/16-inch boxes, as they are often WAY more expensive than a standard 4×4 metal box. Why you ask? That’s the question we used to always ask ourselves on the jobsite, too.. We always figured companies know home owners usually need at least two of these items (each home usually has at least an oven and a dryer), and so they gouge a little bit as they know the customer needs them.. 😉

Make sure you support this 4-11/16-in box on TWO SIDES for it to meet code. You also have to raise up the range box with a scab underneath, bringing up the Oven plug a little higher, so it isn’t so low to the ground, to meet code, and make it easier for the home owner to plugin their cord.

I’ve also been told there is a proper direction to install these 4-11/16 boxes so that when you put on the 40A range plug, you can put the cable to the right or left, and allow the cable to be tucked in nicely behind the oven’s bottom compartment, allowing the oven to be pushed in without sticking off the wall awkwardly.

So that’s a little overview of residential boxes we electricians use.

In other words, we use these boxes in wood frame construction.

This is not to say you can’t use metal boxes in wood frame, but these plastic ones are less expensive and are meant for wood frame.

Hope this one gives you a solid basic overview 🙂 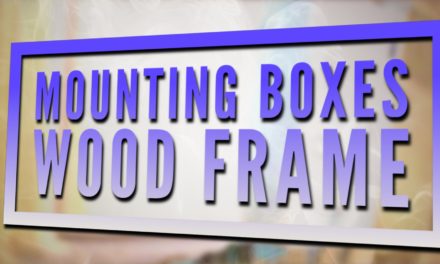