How Circuit Numbers Work in a Three-Phase Electrical Panel 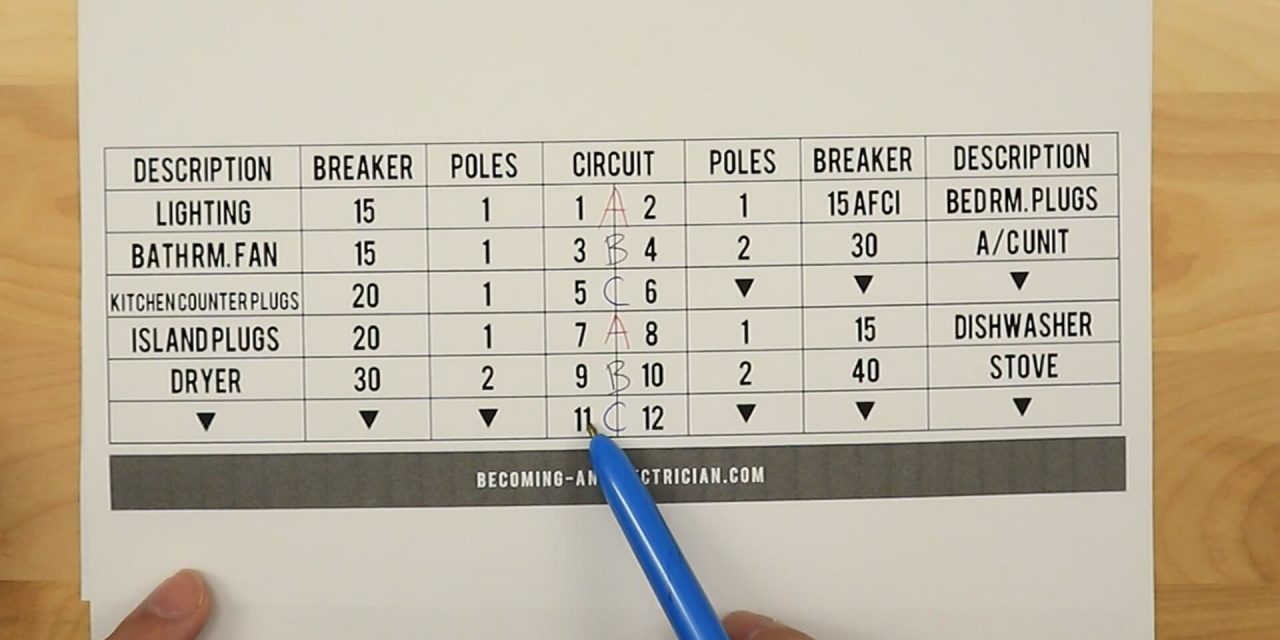 Both a Single Phase Panel and a Three Phase Panel are very similar. The only difference when looking at how circuit numbers work in a three-phase electrical panel is it has C phase, which is blue in color.

In other words, this is one extra circuit for the main conductors powering the three phase panel. A three phase panel has a total of 3 hot wires, and 1 neutral (if the panel requires a neutral, such as in a 4-wire wye system, as compared to a 3-wire delta-system [no neutral]).

In a typically three-phase panel with a neutral (wye system), there are three hot wires. These are known as A, B, C.. or Red, Black, Blue, respectively.

If the panel is providing only motor loads, you can actually have a three phase panel without a neutral, which is known as a Delta configuration.

How to Count Circuits in a Three Phase Panel

To understand how circuit numbers work in a panel, you should start with how to read an electrical panel schedule (it has a video covering single and three phase panels). It will discusses how your bus bar works, and how to count circuits in general terms.

How a panel works is the left side is your odd numbered circuits, and the right side of the panel are your even numbered circuits. (This is important to know because of how circuit breakers are designed.. explained below).

The numbers just increase to keep track of circuit numbers when reading electrical prints to help understand where electrical equipment is located throughout the building.

But all circuits from this electrical panel schedule are powered by the same 3 main conductors feeding the panel (the big wires powering the WHOLE panel).

Here’s some very important things to know about counting circuits, and pulling wires as an electrician.

We Do NOT use both odd and even numbered circuits when grouping circuits to share a neutral. We only use odd numbers, or even numbers.

Additionally, this circuit breaker MUST trip ALL circuits when “grouping circuits” or “sharing a neutral” with a breaker tie bar, so that if one circuit trips, ALL those circuits trip.

This is a VERY important safety feature for humans, as well as equipment (Let’s three circuits share a neutral, and somehow only 1 circuit trips, and the other two are still hot. Operation will still be okay, but if an electrician works on this dead circuit, thinking ALL circuits are not hot sharing the neutral, they can get severely shocked when opening up the neutral spice, which is like losing the neutral, and equipment could be powered by two hot wires, giving it WAY more voltage.. and BOOM!).

For example, 1, 3, 5 and a Neutral are all odd numbers, and are on the LEFT side of the panel. If we use a single neutral for circuits 1, 3, 5, it needs to be a three pole breaker so that if one circuit trips, all of the other circuits trip.

If a three phase motor is asking for 1, 3, 5 (and no neutral), the same thing applies.. we must use a three-pole breaker which trips all circuits as a safety precaution.

So that’s why we do not group odd and even numbers in a panel, because the circuit breaker is designed to be installed for only odd numbers or only even numbers going downward.

One thing to mention is if a panel starts to get full, you may see “tandem breakers” out there, which share the same phase.. You again have to be VERY careful with these, because you may THINK it’s two circuits, but it’s actually Circuit #1 A, and Circuit #1 B.. notice it’s STILL Circuit #1 which mean’s it’s A PHASE (Red), but it has #1 A and #1 B showing it has two separate switches using the SAME PHASE!

Before moving on, it’s important to understand how to get different voltages.

When we use a single phase and a neutral, that will give us 120V. This is because we are using one hot wire (let’s say A Phase), and the neutral (which is actually the ground). We power most basic equipment this way like lights, TVs, or other house-old electrical items.

Now when we use TWO hot wires (two phases), this is where we can get into 208V or 240V. This difference simply comes down to the transformer that is feeding the main service panel.

If it’s a typical home, the main panel is fed with 240V. If it’s a commercial building, it’s typically powered with a three-phase system, meaning we get 208V when using two hot wires OR three hot wires! This is because in three-phase if we go A + B it’s single phase 208V.. and if we use all three wires, get three-phase 208V..

How a Single Panel Differs from a 3 ϕ Panel

A single phase panel actually has TWO HOT WIRES, and a three phase panel has THREE HOT WIRES (with C Phase / Blue being the difference), that’s it!

So back to a three phase panel. Single phase is the same thing when sharing the neutral, except for one less hot wire (C Phase).. that is all.. it’s not more complicated than that.. except when in school.. we use root 3 (√3) in our calculations to find ampacity.. too technical for this article though.

The answer is yes, three-phase is better.. and there’s many reasons for it actually!

First is because a three-phase system has three phases. Think of “phase” as timing. When you get into multi-wire branch circuits, which means sharing a neutral between hot wires, you can use one neutral for three wires! This is because each phase is 120° out of phase.. which means they each “fire” at slightly different timings, allowing the neutral to not get as hot.

In short, it allows you to use less wires. Copper is expensive, and if a commercial building has 100+ circuits, electrical companies can be saving $1000’s of dollars a year by sharing neutrals.

Second is motors are much more efficient because the 120° timings allows each phase to keep powering the motor without long periods of gaps. Remember, in North America, electricity operates at 60Hz.. so we can’t change how fast electricity “triggers”.. so by using the third C Phase, it’s essentially like “triggering” electrical equipment faster, which can allow motor sizes to be smaller (again, reducing cost!)

Third is wire size.. Because of the 120° timings, as well as sharing a neutral, we are able to combine all benefits of three-phase, and reduce wire size, amount of wires used, reduce labor times.. and many others you can think of.

Are there Downsides to Three Phase Systems?

No, not really! The things to be careful of in a three-phase system, also apply to a single-phase electrical system. This is mainly when sharing a neutral that the circuit breaker MUST TRIP ALL CIRCUITS if any circuit trips while sharing a neutral, or if a piece of electrical equipment uses all conductors to be powered.

When you lose a neutral, other equipment can get much more voltage because of the science of electricity. For example, your TV that requires 120V could get 180V sent to it, and can severely damage the electrical components!

This is a major downfall of multi-wire branch circuits, and applies to both single-phase and three-phase systems.

So I hope that helps you understand how to count circuits in an electrical panel.

A “clean set of wires” would be 1, 3, 5, and N. You can do stuff like 3, 5, 7, and N, but it gets really tricky to troubleshoot if there is no organization.. and are called “dirty sets” on an electrical jobsite.

To keep the “clean sets” going, here’s an example..

1, 3, N let’s say power different banks of lights. Circuit 1 (A Phase) and Circuit 3 (B Phase) share a neutral and go back to the panel. All is good!

But now Circuit 5, which could have been a part of that “clean set”, needs to be pulled way to the other side of the building. In this case, we’d just run Circuit 5 with ITS OWN Neutral.

There are downfalls of sharing a neutral besides losing a neutral, like harmonics and similar studies when powering computers and electronics.. so ideally, every circuit SHOULD have its own neutral, but sometimes the job’s bid cost doesn’t allow for that.

Also, sometimes your jobsite specs specify no neutral sharing.. so keep an eye out!

Make sure to leave a comment below if you have questions.. or laugh at some funny electrical jokes!